Focus on Libya, Palestinian cause | THE DAILY TRIBUNE | KINGDOM OF BAHRAIN 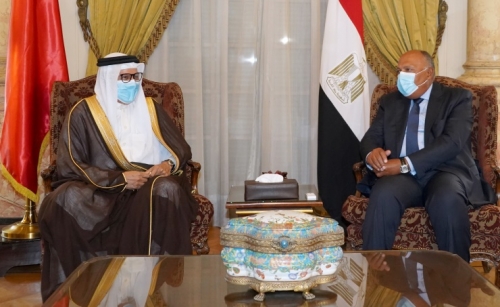 Focus on Libya, Palestinian cause

Bahrain’s Minister of Foreign Affairs, Dr Abdullatif bin Rashid Al-Zayani yesterday held talks with his Egyptian counterpart, Sameh Shoukry at Tahrir Palace. They jointly welcomed initiatives aimed at achieving a comprehensive and just peace for the Palestinian cause, with an emphasis on the two-state solution and stopping the annexation of the Palestinian territories.

The ministers also stressed their support for a consensual political solution in Libya and reiterated their support for a ceasefire, the formation of a new presidential council, and a fair distribution of the country’s resources. Minister Shoukry also reaffirmed the position of Egypt in support of Bahrain and the Arabian Gulf in facing any challenges threatening their security and stability.

The meeting was attended by senior officials from the Ministry of Foreign Affairs of Egypt and the Ambassador of Bahrain to Egypt and Permanent Representative to the League of Arab States, Hisham Mohammed Al-Jowder. The ministers also highlighted the importance of facing foreign interventions aimed at undermining security and stability in the region.

A decision was also made to coordinate positions in the next meeting of the League of Arab States Council at the ministerial level to support joint Arab action. Minister Shoukry thanked Bahrain for its support to the Egyptian community residing in the Kingdom following the outbreak of COVID-19. Al-Zayani valued the role of the Egyptian community in achieving economic and social development in Bahrain.

Bahrain’s Foreign Minister holds talks with the President of Egypt