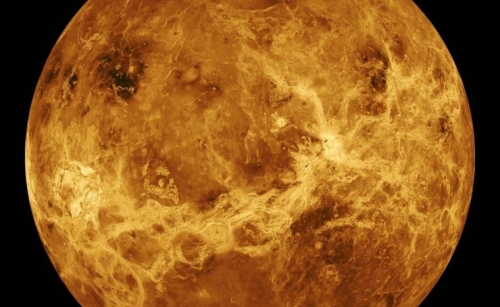 Astronomers announced on Monday that they have identified rare molecules in the clouds of Venus that provide "hints of life" on Earth's closest planetary neighbor.

Researchers from Britain, Japan, and the United States said they estimated that Venus' clouds contained phosphine at a concentration of about 20 molecules in every billion.

Calculations appeared to rule out the phosphine being produced by non-biological processes, such as volcanic eruptions, storms, sunlight, or dust suspension, they said, publishing their findings in the journal Nature Astronomy, Deutsche press agency (DPA) reported.

Non-biological sources were estimated to be capable of producing less than one-ten-thousandth of the phosphine detected via observatories in Hawaii and Chile.

"I thought we’d just be able to rule out extreme scenarios, like the clouds being stuffed full of organisms," Greaves said. "When we got the first hints of phosphine in Venus' spectrum, it was a shock!"

The detection of phosphine, formed from hydrogen and phosphorus, could indicate the presence of such "extra-terrestrial 'aerial' life," the researchers said.

Phosphine gas is produced naturally on Earth only by microbes that thrive in oxygen-free environments with up to 5 percent acidity, said Clara Sousa Silva of the Massachusetts Institute of Technology.

"But the clouds of Venus are almost entirely made of acid," Silva said, adding that the team's discovery "raises many questions, such as how any organisms could survive."