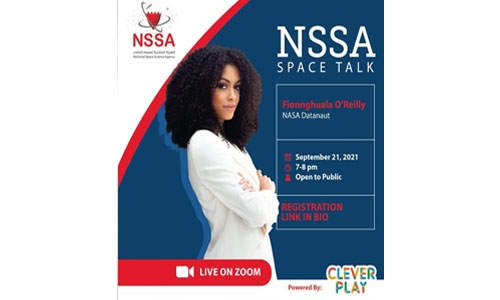 The contributions data scientists make in space missions will be the focus of a talk about space science next week.

The contributions range from exploring new ways of thinking to develop products and processes combining a mix of expertise, and NASA datanaut Fionnghuala O'Reilly will deliver the message that science is not just for scientists.

Her talk on September 21 will be the first in a webinar series launched by the National Space Science Agency (NSSA) and featuring field experts, space and science, technology, engineering, and math (STEM) enthusiasts as well as up-and-coming movers in the field of space science.

It will be the second year that NSSA launches into the mainstream interesting conversations about space science.

Popularly known as Miss Universe Ireland 2019, O'Reilly or Fig, as she is called, is a passionate advocate for diversity and women’s participation in STEM fields.

As a NASA datanaut, she is developing her data science skills through access to and use of NASA’s open astronomy data to merge ideas and share skills with others coming from various fields. She also founded Space to Reach, the host of NASA’s International Space Apps Challenge in Washington, DC.

Her message that science is not just for scientists will no doubt resonate as she shares the life and work experiences that shaped her STEM-oriented mindset.

Her one-hour talk via Zoom at 7 pm will be a different kind of talk, a different take, and a unique viewpoint from a young woman’s perspective. The talk is open to the public and further details are available on NSSA.gov.bh and Instagram @nssa_bh.