Marking a milestone | THE DAILY TRIBUNE | KINGDOM OF BAHRAIN 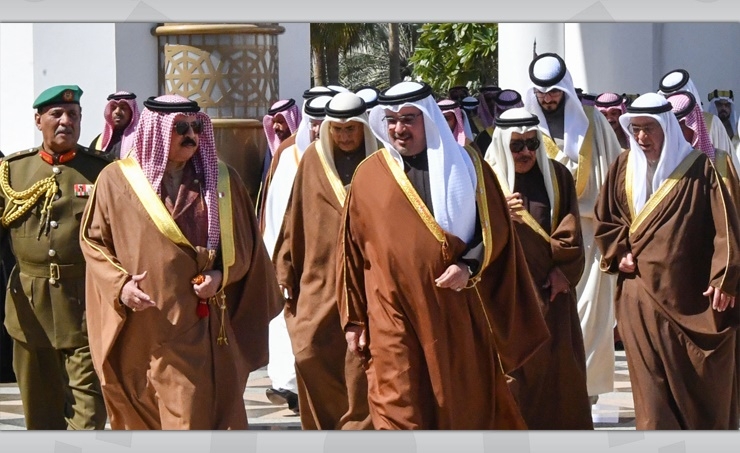 Senior Royal Family members extended to HM the King deepest congratulations on the glorious occasion, expressing utmost pride in the landmark achievements attained by the kingdom in all fields and the distinguished position it has reached at the international level thanks to HM King Hamad’s leadership. They praised the tremendous efforts exerted by HM the King to enhance Bahrain’s relations with brotherly and friendly countries, as well as to promote its honourable stances at global gatherings and strengthen its leading role at the Arab and international levels.

They prayed to Allah the Almighty to guide HM the King on the right path, and to bless him with abundant health and happiness to continue leading the progress march witnessed by the kingdom during his prosperous era. HM the King welcomed senior Royal Family members, and exchanged with them congratulations on the dear national occasion, expressing thanks and appreciation to them for the their noble patriotic feelings and supplications. HM King Hamad said that the glorious historic day is an opportunity to recall with pride the patriotic stances of the beloved Bahraini people on the referendum day, noting that the adoption of the National Action Charter paved the way for embarking on a promising march of building the Kingdom’s institutions and constitutional branches, in line with the aspirations of the Bahraini citizens whose unprecedented consensus, HM the King said, embodied the all-inclusive Bahraini identity that seeks development and civilisational progress.

HM the King underlined the importance of adherence to the essence and principles of the National Action Charter by preserving what has been achieved so far, and carrying on dedicated efforts to build on hard-won national gains and increase them. HM the King stressed the importance of continuous and constructive co-operation between the Executive and Legislative branches, expressing appreciation for the members of the two branches for their constant keenness to place the interests of the nation and the citizens at top of their priorities.

In this regard, HM the King lauded the achievements of the bicameral National Assembly, and its success in playing the role assigned to it to the fullest. HM King Hamad affirmed that the Bahraini citizens will always remain the focus of the development march and its ultimate goal, expressing pride in the solidarity among all Bahraini citizens, as well as their cohesion and unified stances, citing the tireless efforts of Bahraini competencies to enrich the national march and increase the Kingdom’s pioneering achievements at various gatherings.