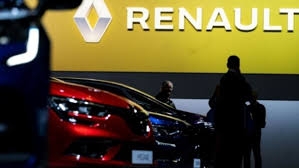 French carmaker Renault said yesterday it went into the red last year for the first time in a decade on lower sales and a falling contribution from its Japanese partner Nissan. Renault said in a statement it suffered net losses of 141 million euros ($152 million).

It added the outlook for 2020 was bleak with a fresh fall in operational profitability expected and did not rule out possible plant closures. Last year saw group operating margin drop from 6.3 per cent to 4.8 pc, though Renault stated that it “achieved its targets, revised in October,” despite “a troubled context.” The auto giant in 2019 marked its first full year without former emblematic CEO Carlos Ghosn, arrested in Japan in November 2018 over allegations of financial misconduct, including under reporting salary and misuse of company assets at Renault partner Nissan.

Brazilian-born Ghosn, who also has French and Lebanese nationality, is now in Lebanon, where he fled in December after jumping bail in Japan. In a struggling global auto market Renault saw group revenues slide 3.3 pc to 55.5 billion euros while confirming sales dropped 3.4 pc at 3.75 million vehicles. Unveiling operating income down almost a third to 2.11 billion euros, the group said it expected 2020 to bring a further profitability hit, with revenues of a similar order to 2019. “Visibility for 2020 remains limited by expected market volatility ... and the possible impacts of the coronavirus,” said acting CEO Clotilde Delbos.

Ghosn fallout Renault also took a hit from a decline in the financial contribution of a likewise struggling Nissan, in which it has a 43-pc stake, coming in at 242 million euros, down from 1.51 billion in 2018. Thursday, Nissan said its net profit plunged more than 87 pc for the nine months to December as it struggles with weak demand and fallout from the Ghosn case.

Nissan also revised downwards its full-year sales and profit forecasts, but warned that the impact from the spreading coronavirus crisis was not yet included in their figures. Friday’s results marked the first time Renault -- which said it would slash its dividend by more than two thirds to 1.10 euros a share -- had plunged into the red since 2009 in the throes of the financial crisis when it made a 3.1 billion euro loss.