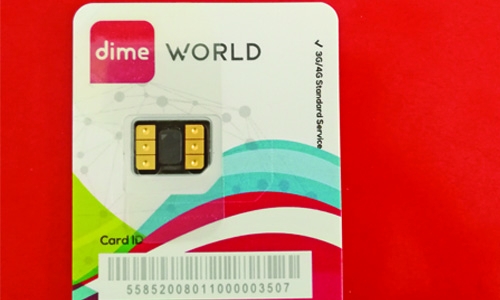 Manama : Dime World, an Over The Top (OTT) technology that will give users inexpensive data connectivity while roaming in other countries was launched yesterday.

The technology, a sticker that can be pasted on a sim-card, will provide inexpensive internet packages while traveling in other countries.The packages can be purchased via the Dime World App. Dime World also comes in a second form - as an independent sim card.

The technology was unveiled by the newly launched company Dime Global during an event at InterContinental Regency Bahrain yesterday.

“Dime world is based on a technology called an OTT sim-card, it is something that will be stuck on to a regular simcard. It will give you local connectivity where ever you travel. Bahrain is the first country to receive dime-world, we will launch it in other countries soon. We are eager to collaborate with all of the three telecom operators in Bahrain,” Dime Global CEO AbdulAziz Qamber told DT News.

“As of now the technology supports internet data but not yet phone calls, this means you can go to another country and continue to have local connectivity. However,  you can still make calls through our app or you can make calls from an application such as Whatsapp,” he said.

“Dime World is our solution to the expensive roaming charges that the operators are charging on data connectivity. With this service you can have data connectivity in more than 70 countries in the world,” he added.

He was speaking to DT News on the sidelines of the event yesterday  which was held to celebrate the first Anniversary of Dime Bahrain and the launch of Dime Global. The event was held under the patronage of Minister of Transport and Communications Kamal bin Ahmed Mohammed. During the event, World renowned Digital Marketing expert, Neal Schaffer gave a key note speech on digital transformation.