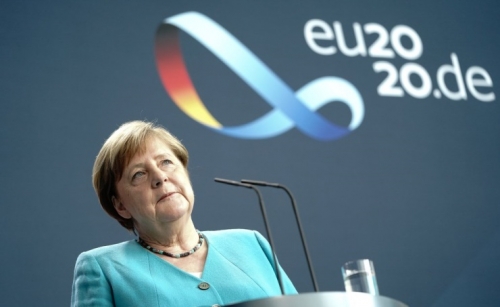 German Chancellor Angela Merkel is to meet the presidents of the three main EU institutions on Wednesday to discuss Germany's EU council presidency, which looks set to be dominated by the bloc's economic recovery following the coronavirus pandemic.

During her first trip abroad since the beginning of the pandemic, Merkel will meet the presidents of the European Parliament, European Council, and European Commission: David Sassoli, Charles Michel and Ursula von der Leyen, respectively, according to Deutsche press Agency (dpa).

Germany took over the EU Council presidency on July 1 and will hand it over to Portugal after six months. One of the biggest issues on their plate is the controversial multi-billion-euro coronavirus recovery plan. The meeting takes place a little more than a week before the EU's 27 heads of governments meet again to push for a consensus. A similar meeting at the end of June did not result in any concrete agreement.

Under von der Leyen's watch, the European Commission proposed a 750 billion-euro ($846 billion) package consisting of 500 billion euros in grants and 250 billion euros in loans. But while the meeting on Wednesday could pave a way for finding negotiation ground for next week's talks, the strongest disagreement is expected between leaders not present on this day.