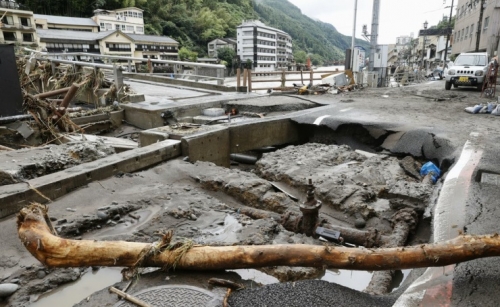 By Wednesday morning, parts of Nagano and Gifu in central Japan were flooded by massive downpours. Footage on NHK television showed a swollen river gouging into the embankment, destroying a highway, while in the city of Gero, the rising river was flowing just below a bridge. In a mountainous town of Takayama, several houses were hit by a mudslide, their residents all safely rescued.

In Kagoshima, a pickup truck was hit by a mudslide and fell into the ocean, but the driver was airlifted out with a head injury, according to Fuji Television. In another town in Oita, two brothers in the 80s were dug up alive by rescuers after a mudslide smashed into their hillside house, NHK said.