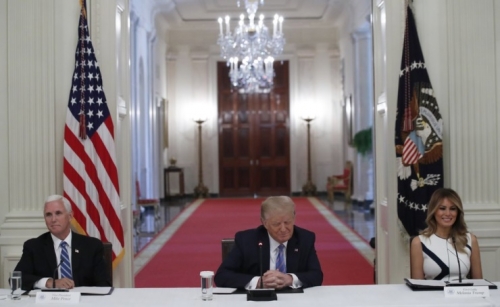 President Donald Trump launched an all-out effort pressing state and local officials to reopen schools this fall, arguing that some are keeping schools closed not because of the risks from the coronavirus pandemic but for political reasons.

“They think it’s going to be good for them politically, so they keep the schools closed,” Trump said Tuesday at a White House discussion on school plans for the fall. “No way. We’re very much going to put pressure on governors and everybody else to open the schools.”

The White House’s round-table gathered health and education leaders from across the nation who said schools and colleges are ready to open this fall and can do so safely. They argued that the risks of keeping students at home outweigh any risks tied to the coronavirus, saying students need access to meal programs and mental and behavioral health services, The Associated Press reported.

“We want to reopen the schools,” Trump said. “Everybody wants it. The moms want it, the dads want it, the kids want it. It’s time to do it.” But that bright outlook was met with skepticism by some beyond the White House. The president of the nation’s largest education union said Trump is more interested in scoring points for the November election than in keeping students safe.

“Trump has proven to be incapable of grasping that people are dying — that more than 130,000 Americans have already died,” said Lily Eskelsen García, president of the National Education Association. “Educators want nothing more than to be back in classrooms and on college campuses with our students, but we must do it in a way that keeps students, educators and communities safe.”