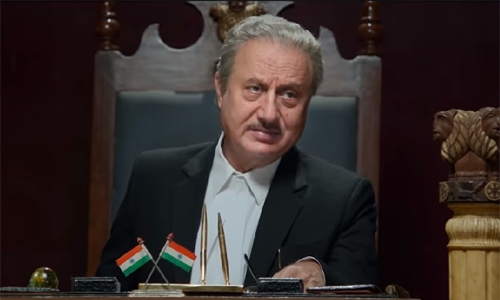 One Day: Justice Delivered is a 2019 Indian Hindi-language action thriller film produced by Ketan Patel and Swati Singh, written by Alaukik Rahi and directed by Ashok Nanda. The film starring Anupam Kher, Esha Gupta, Kumud Mishra , and Anusmriti Sarkar follows investigation by a police officer (played by Gupta), into the vanishing of important persons in a state capital. The music of the film is composed by Vikrant-Parijat, Joy-Anjaan and Rishi Singh and it was released on 5th July 2019.

It’s a story of a retired judge Tyagi (Anupam Kher), who turns vigilante after retirement, to punish all those culprits who were walking the streets scotfree owing to lack of evidence against them. Tyagi was bound by law to give judgements on some cases that he felt were unfair. And one particular incident jolts him from the inside and that’s when he takes matters into his own hands and embarks on a mission to extract confessions from all those criminals.

Simultaneously, when a series of missing person cases involving high-profile individuals intrigues a crime branch special officer Laxmi Rathi (Esha Gupta), she decides to investigate the matter. The overall story is quite intriguing but direction by Ashok Nanda is sloppy and disjointed as well, especially the first part. The second half, however, picks up pace and makes it an interesting watch. Even the performance by Anupam Kher as retired Judge is quite promising and so is that of Inspector Sharma’s (Kumud Mishra).

Esha has played a similar kind of de-glam role in another 2012 movie but this time, she outshines her own past performance as a tough cop. Only thing that seems like a total misfit is her Haryanvi accent, which is not at all convincing. Music is easily forgettable as there is not even a single song that goes well with the storyline, except for the title track ‘One Day’ sung by Usha Uthup – the veteran singer is in her element.

At start it looks like a good vigilante thriller but soon reduces to being an average affair. Point is when we can catch up some good well-cooked thrillers, then why to wait for this half-hearted tale of justice.