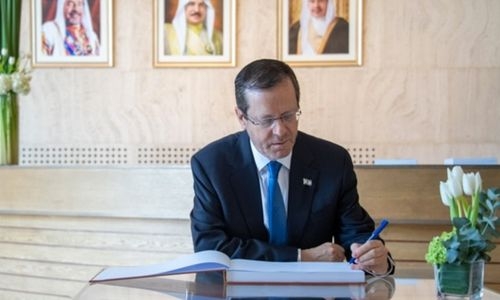 The delegation was briefed on the museum’s antiques that reflect Bahrain's history and cultural legacy.

The visit included a tour of the main foyer of the museum, which hosts an art exhibition on the visit of His Holiness Pope Francis of the Vatican during his participation in the Forum for Dialogue: East and West for Human Coexistence.

The Israeli president toured the most important halls that contain the Kingdom’s historical artifacts for more than 4,000 years, and the Dilmun Cemetery hall which was dedicated to the ancient site of the Dilmun Hills, which is registered on the World Heritage List of the United Nations Educational, Scientific and Cultural Organization (UNESCO).

He was briefed on the role of the museum in building communication between Bahrain and the world and introducing its visitors to the culture, heritage, and activities of the Kingdom.