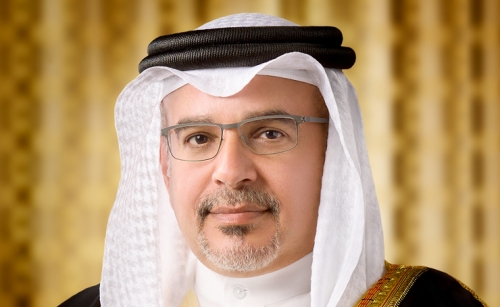 His Royal Highness gave a statement in which he expressed his pleasure in visiting Egypt, and highlighted the strength of bilateral ties between both countries.

His Royal Highness then conveyed the greetings of His Majesty King Hamad bin Isa Al Khalifa, to the President of the Arab Republic of Egypt, HE Abdel Fattah El-Sisi, as well as His Majesty’s wishes for a successful conference that will strengthen international cooperation on climate change.

His Royal Highness affirmed the Kingdom of Bahrain's commitment to further bolstering Bahrain-Egypt relations and noted the Kingdom’s pride in Egypt's championing of common Arab interests.

HRH Prince Salman bin Hamad went on to commend the progress and development experienced by Egypt, under the leadership of HE El-Sisi.

His Royal Highness highlighted the importance of COP27, which is taking place against a backdrop of global climate challenges that require innovative and collective international action to develop solutions that protect the environment.

On his arrival in Sharm El Sheikh, His Royal Highness was accompanied by the Minister of Finance and National Economy, HE Shaikh Salman bin Khalifa Al Khalifa, the Minister of Oil and Environment, Bahrain's Special Envoy for Climate Affairs, HE Dr Mohammed bin Mubarak bin Daina, and the Minister of Sustainable Development, HE Noor bint Ali Al Khulaif.

World leaders gather for climate talks under cloud of crises