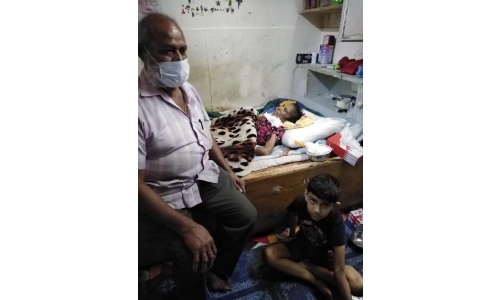 This expat family in Bahrain pleads for support

An expatriate family of three is pleading for help after its member, a 62-year-old woman is seriously ill and bed-ridden. Radhika Baignath suffered a stroke last year and was under treatment at Salmaniya Medical Complex (SMC) for nearly two months. She suffers from acute diabetes and hypertension.

According to her husband Mangalnand Kishore, a 66-year old man, Radhika has been bed-ridden for ten months now after being discharged from SMC. The couple has a son Prince Kumar.

“I am an old man and am not in a position to take care of my bed-ridden wife. I will have my relatives to help me If I return home,” said Kishore, who runs a laundry, has been a long-time resident in the Kingdom.

The family lives in a ramshackle room in Gudaibiya. “I came here at the age of nine along with my father, who was running a laundry here then. Since then, I have been a resident here.”

Kishore said that he and his family have valid visas and are legal residents in the Kingdom. Both Kishore and Radhika hail from the Unnao district belonging to the Uttar Pradesh state of India.

The family’s plight was brought to light by social workers Ashkar Poozithala and Shaji Elambilayi - both volunteers of the Cultural Organisation ‘Hope Bahrain’.