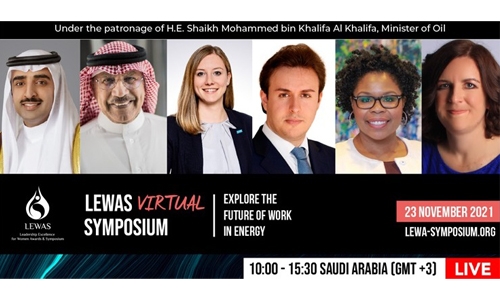 the forum aimed to discuss the reality and future of empowerment and progress of women in the energy industry in the region, and highlight the success stories of outstanding women leadership in the sector.

In his speech, the minister stressed that Bahraini women have reached their rightful place in the field of empowerment, progress and equal opportunities under the guidance of HM King Hamad bin Isa Al Khalifa and the efforts of the government headed by HRH Prince Salman bin Hamad Al Khalifa the Crown Prince and Prime Minister, which resulted in a legislative, and legal environment that strengthened the women's participation in the overall development process in the Kingdom.

The minister praised the pioneering role played by HRH Princess Sabeeka bint Ibrahim Al Khalifa, Wife of HM the King and President of the Supreme Council for Women (SCW), and her vision to promote women in Bahrain and support them with plans, programs and strategies that have elevated women's ability to achieve.

He expressed his appreciation to all the women working in the energy sector for their creativity, determination and great effort, which has had a clear impact on the success and development of the sector.

Shaikh Mohammed noted that the discussions in the forum will spread the culture of excellence for women leaders not only in Bahrain but also in the Middle East. In addition to the fact that the forum is an opportunity to share experiences and stories about women's abilities and excellence in leadership positions and to introduce their achievements in this field.

He praised the efforts made by the committee of the forum and LEWAS 2021 headed by Reem Al Ghanim from Saudi Aramco and Ezz Al Mannai from the Oil Ministry, in preparing for the forum and awards, wishing the forum all success in achieving its current and future goals.

A large group of Arab and international leaders in the fields of energy will participate in the forum to enrich the forum with their experiences and ideas on the best experiences of women's tenders, and their role in developing practices related to the energy sectors and the reality of the post-pandemic sector.

The forum includes a series of dialogue and discussion sessions on many related topics, including a panel discussion entitled "Leadership through a changing competitive economy", where prominent women leaders in the Middle East present their vision of how to drive during difficult times and compete successfully in unstable markets.