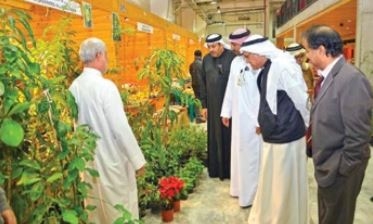 Ali Al Asfoor, Governor of  the Northern Governorate, has  praised the support of Her Royal Highness Princess Sabeeka bint Ibrahim Al Khalifa, Wife of HM the King, Chairwoman of the Supreme Council for Women for the Agricultural Sector, and the contributions of Her Highness in enhancing the role of this sector in the Kingdom through the National Initiative for the Development of the Agricultural Sector.

This came during the governor’s visit to the Center for Agricultural Incubators and the Farmers’ Market in Hoorat Aali, which opens its doors for visitors from Monday to Saturday from 8 am to 3 pm.

The Governor praised the role of the Bahrain Center for the Development of Emerging Industries, the authority overseeing the organisation of work in the Center for Agricultural Incubators and the Farmers’ Market.

He expressed his satisfaction for the distinguished Bahraini products produced by the agricultural incubators in Hoorat A’ali and the farms, which reflect the extent of support enjoyed by this sector.

“We appreciate the role of the Bahraini farmer and his keenness to develop research in the field of agricultural diversification.”

The governor called for intensifying efforts to support such projects and promote them in tourism, and the importance of supporting the tourism sector and its role in attracting tourists to such projects that reflect the cultural façade of the Kingdom, thanking the administration for the good presentation and organisation.