Busy cruise season ahead | THE DAILY TRIBUNE | KINGDOM OF BAHRAIN 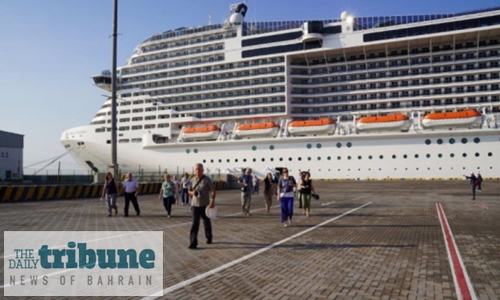 Bahrain is expecting this cruise season to be extremely busy with the authority here anticipating around 100,000 cruise ship visitors. Nader Khalil Al Moayyed, Bahrain Tourism and Exhibitions Authority (BTEA) Chief Executive Officer, said this as the Kingdom yesterday received more than 7,000 passengers who arrived on board MSC Bellisima and AIDAprima.

Representatives of the BTEA welcomed travellers with sweets and Arabic coffee, giving them a glimpse into the rich history of Bahrain and the hospitality of its people. Visitors also had the opportunity to take photos with a falcon or have their hands decorated with traditional henna designs.

BTEA said it is working closely with a group of governmental entities and tour operators to enhance the visitor experience and ensure a smooth journey to the Kingdom. During their stay, visitors were introduced to famous tourist destinations in the Kingdom, including the Royal Camel Farm, Manama Souq, Al Fateh Grand Mosque, Bahrain International Circuit, Bahrain Fort, Bahrain National Museum, Bu Maher Fort, Shaikh Ebrahim Center and the Old Houses of Muharraq.

“The BTEA’s strategy focuses on four main pillars including Awareness, Attraction, Access and Accommodation, in addition to developing the Kingdom’s ports and marine facilities to attract more incoming tourist ships in the region and increase the number visitors coming into the Kingdom,” Al Moayyed said.

He said the authority is aiming to double the contribution of the tourism sector in the national economy in line with the Economic Vision 2030 that seeks to increase the Gross Domestic Product (GDP) of the non-oil sectors. “Thanks to the ongoing growth of Bahrain as a destination for cruise ships, we look forward to receiving more in the coming months within the tourist season that continues during October and April.

“We expect that the number of trips this season will amount to 61 trips that include approximately 100,000 visitors,” added Al Moayyed.