Team Bahrain does it | THE DAILY TRIBUNE | KINGDOM OF BAHRAIN 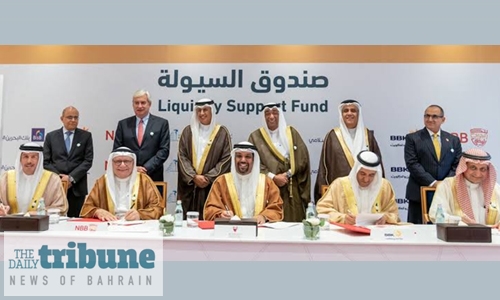 Team Bahrain does it

The Ministry of Finance and National Economy yesterday launched a BD 100 million Liquidity Support Fund in line with the directives of His Royal Highness the Crown Prince during the 2019 Government Forum. The Fund was launched in cooperation with the Ministry of Industry, Commerce and Tourism, Bahrain Chamber of Commerce and Industry, Bahrain Labour Fund (Tamkeen) and national banks.

The Minister said the swift cross-sector collaboration that has delivered the Fund’s launch within two months of HRH the Crown Prince’s directives is a testament to the remarkable potential of Team Bahrain. Chairman of the Bahrain Chamber of Commerce and Industry (BCCI) Sameer Abdulla Nass voiced pride in the fund worth BD 100 million.

Nass expressed confidence in the outcomes of the fund in empowering local businesses and invigorating the national economy. “NBB is proud to be a strategic partner of Bahrain in this ambitious initiative spearheaded by His Royal Highness. We commit our on-going support to the Fund’s mandate and will continue to take a proactive role to ensure the successful implementation of this scheme,” said Farouk Yousuf Khalil Almoayyed, Chairman of the National Bank of Bahrain.

Murad Ali Murad, Chairman of BBK, said the scheme will be of great support to the growth of Bahrain and its economy. Dr Essam Abdulla Yousif Fakhro, Chairman of the Bahrain Islamic Bank, expressed his delighted in playing an active role in this national initiative which will provide vital support to SMEs and Bahrain’s Economic Vision 2030.

Bahrain Development Bank Group’s Chairman, Khalid Al Rumaihi, hailed the Liquidity Support Fund’s launch, as a unique concept to support companies and SMEs in particular. “SMEs are the backbone of the economy, generating employment opportunities and spurring overall demand. This focused approach to support SMEs is a model, which I expect to be emulated elsewhere,” Al Rumaihi said.