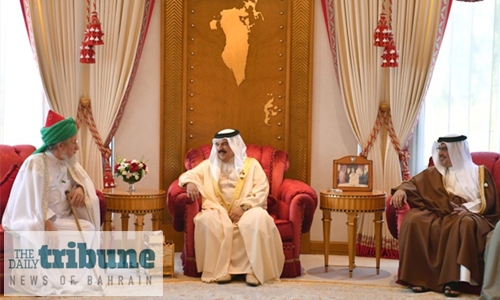 His Majesty King Hamad bin Isa Al Khalifa yesterday lauded the efforts of Russian President Vladimir Putin in strengthening the long-standing bilateral ties with the Kingdom. His Majesty stressed the depth of relations between Bahrain and Russia, hailing the advanced level reached by bilateral cooperation at all levels.

HM the King was receiving the Grand Mufti and Chairman of the Central Spiritual Administration of Muslims of Russia, Talgat Tajuddin, alongside his son. His Royal Highness Prince Salman bin Hamad Al Khalifa, the Crown Prince, Deputy Supreme Commander and First Deputy Prime Minister was present at the meeting held at the Al-Sakhir Palace.

Talgat Tajuddin conveyed to HM the King greetings and appreciation from Russian President, Vladimir Putin, as well as his wishes of further progress and prosperity to Bahrain and its people. HM King Hamad valued highly the efforts exerted by Grand Mufti, Talgat Tajuddin, to promote co-existence, dialogue and moderation, as well as disseminate the authentic Islamic concepts.

His Majesty praised the ongoing cooperation between Bahrain’s Supreme Council for Islamic Affairs and Islamic institutions in Russia for the best interests of the two sides. The Grand Mufti presented His Majesty the King with a book issued by the Central Spiritual Administration of Muslims of Russia, in addition to a historical sword dating back to the ancient civilisation in Russia.

Team Bahrain does it