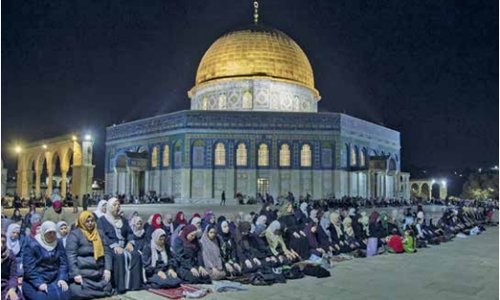 Interesting facts about the holy month of fasting

The Holy month of Ramadan is one of the five pillars of Islam that is observed by the Muslims around the world with great reverence as part of their religious duty. Following the lunar calendar, every year Muslims start their month of fasting after the moonsighting by the religious scholars; it usually lasts for 29 or 30 days depending on the Shawal moon.

Ramadan was named such because it burns the sins of the believers. Fasting is obligatory for adult Muslims, except those suffering from an illness or those who are travelling, are elderly, pregnant, breastfeeding, diabetic, chronically ill or menstruating. Ramadan falls on the 9th month of the lunar calendar. It is the month when the Holy Quran was revealed to the Prophet Mohammad (P.B.U.H).

Muslims greet each other Ramadan Kareem, once the moon is sighted. Special meals are prepared for the ritual. During the fast the devotees refrain from eating and drinking from dawn till dusk. Food intake is allowed before dawn breaks and after the sun set. The meal before dawn is called Sahar and the breaking of fast at sunset is called Iftar. The fast is preferably broken with dates, following the Sunnah of Prophet Mohammad. Muslims try to do good deeds as much as possible to be rewarded by Allah Almighty. A feeling of communion is observed during the fasting days.

People come together and are encouraged to break the fast with family and friends. Duty hours are cut short in many parts of the Muslim world to facilitate their brethren to observe their Sawm and Salat. Taraweh prayers are offered. Muslims try to be more dutiful towards their five obligatory prayers, if not more and recite the Holy Quran to earn Allah Almighty’s blessing. The most revered night Laylat al-Qadr, falls on one of the odd nights of the last 10 days of Ramadan.

It is believed to be the night when the first revelation was sent to Prophet Mohammad. It is a common practice to give more charity in this month. Islam is the religion of peace and inclusivity, Muslims are required to pay Zakat-ul-Fitr, which is regularly referred to as Fitrana, the amount of Sadqa-eFitr is equal to 2.25 kg flour or the price of raisins, barley and dates, depending on the financial status.

The reason behind the charity is to include those who are not that well off in the festivities of Eid. It should be paid before the Eid day. Eid-ul-Fitr is celebrated marking the end of Ramadan.

Contract to Kill: A movie about stopping terrorism before time runs out