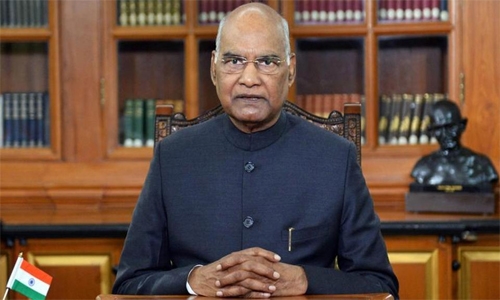 It is a matter of great joy for me to wish all Indians, living in India and abroad, a very Happy Independence Day! This day has a special significance as it marks the beginning of the 75th year of India’s independence for which ‘Azadi Ka Amrit Mahotsav’ is being celebrated.

My hearty congratulations to you all on this momentous occasion! Now as we look back to the seventy-five-year journey of our republic, we have reasons to be proud of the considerable distance we have travelled. Gandhiji taught us that slow and steady steps in the right direction are preferable to rapid strides in the wrong direction. The world looks up at the miracle of India, home to the plurality of traditions and yet the biggest and most vibrant democracy.

In the recently concluded Tokyo Olympics, our sportspersons have brought laurels to the nation with their stellar performances. India has won the highest number of medals in the 121 years of its participation in the Olympics. The economic impact of the pandemic is as disastrous as its health impact. The government has been concerned about the lower middle classes and the poor, as well as about the small and medium industries.

It has been sensitive to the needs of the labourers and of employers who have been facing hardships due to the lockdowns and movement restrictions. Sensitive to their needs, the government had taken a series of relief measures last year. This year also, the government had distributed food grains to about 80 crore people in May and June. This benefit has been extended till Diwali.

Moreover, the government has announced a new stimulus package worth Rupees 6 lakh 28 thousand crores to boost the selected Covid-affected sectors. In particular, it is heartening to note that an amount of Rupees 23 thousand 220 crores is being spent over one year for the expansion of medical facilities.

It is heartening to note that rural India, particularly the agriculture sector has kept growing against all odds. In a recent visit to my ancestral village Paraunkh in Kanpur Dehat district, I was quite pleased to find that better infrastructure is being developed to make life better for people in rural areas. These efforts are consistent with the vision of an Atma Nirbhar Bharat, a self-reliant India. With an abiding faith in the inherent capacity of the economy, the government has further opened up the defence, health, civil aviation, power and other sectors.

The government’s new initiatives to promote eco-friendly, renewable sources of energy, particularly solar power, have won praise around the world. If there is an improvement in the ease of doing business, it has a positive impact on the ease of living for all. In addition to these, special emphasis is being given to public welfare. For example, the dream of having a home of one’s own is being realised, thanks to the Rupees 70,000 crores credit-linked subsidy scheme. The series of agricultural marketing reforms will empower our ‘annadata’ farmers and help them get better prices for their produce. These are some of the measures the government has taken to unleash the potential of every Indian.

The government has planned many initiatives to make this special year memorable, and the most exciting of them all may as well be the Gaganyaan mission. Pilots of the Indian Air Force have been receiving training abroad. When they fly off into space, India will become only the fourth nation on the planet to carry out a manned space mission. When it comes to the flights of our ambitions, we don’t let any limitations define us.

Modern industrial civilization has posed serious challenges before humankind. Climate change has become a reality of life, with seas rising, glaciers melting and temperatures soaring. India is proud of not only adhering to the Paris climate agreement b u t doing more than what the country has committed to protecting the climate.

However, the world desperately needs a course correction. This is why the world is increasingly turning to the wisdom of India, as created by the authors of the Vedas and Upanishads, as depicted in the Ramayana and Mahabharata, as taught by Lord Mahavira, Lord Buddha and Guru Nanak and as reflected in the lives of the likes of Mahatma Gandhi.

I once again congratulate all of you, on the eve of India’s 75th Independence Day. While celebrating this anniversary, I cannot stop my mind from imagining a powerful, prosperous and peaceful India of 2047 when we will celebrate 100 years of our independence. I wish that all our people come out of the difficulties caused by the Covid pandemic and move ahead on the path of happiness and prosperity. Once again, my best wishes to all of you!