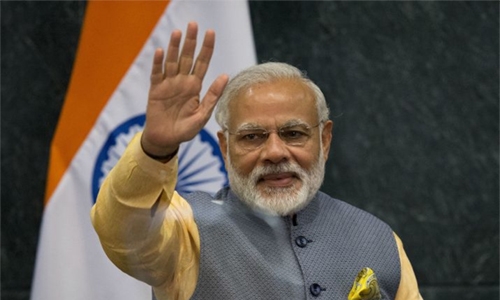 Today is simply auspicious. A day to record, remember and cherish the historical ties between India and Bahrain as we witness the first visit of an Indian Prime Minister to the Kingdom. Being an Indian, it is the proudest moment in my life as I join my community members to welcome Shri Narendra Modi to the land of pearls, which hosts more than 400,000 Indians, who enjoy the warmth of Bahrain government and the guardianship of the Royal Family.

Modiji has become a unique brand not only in India, but also across the world. As a brand that stands for modernisation, originality, dedication and innovation, he is being admired by millions of people around the world. His work approach always carries values and principles that have roots in the Indian civilisation, which is the oldest of all. The one which has contributed gifted leaders like Vardhamana Mahavira, Gautama Buddha, Adi Shankara, Swami Vivekananda and Mahatma Gandhi.

It is not the eminent structures, be it grand Chola temples, Taj Mahal, Qutb Minar, or the vital landscapes such as Himalayas that make India a different country. The country has its soul well rooted in the 5,000 year old civilisation, whose guiding principle was ‘Lokah Samastah Sukhino Bhavantu’.

The Sanskrit mantra means: “May all beings everywhere be happy and free, and may the thoughts, words, and actions of my own life contribute in some way to that happiness and to that freedom for all.” As of today, Vikram Lander of Chandrayaan 2 Mission orbits the Moon and India is heading towards a $ five trillion economy under the wise leadership of Prime Minister Modiji. His welfare schemes like Jan Dhan Yojana, Swacch Bharath, Ayushman Bharath and initiatives like Digital India, Skill India and surgical strike on black money network are taking the country to new levels of inclusive growth and prosperity.

We should acknowledge that despite tough global factors and domestic corrective measures, the economy has been achieving an average growth rate consistently in the neighbourhood of seven per cent. India, being the second largest-populated country, has always had trade and cultural relations with the Middle East. I am sure Modiji will play a pivotal role to boost these historic ties with the larger Arab world including Bahrain. Today on behalf of our readers, I bow to the divine in you. Namaste Modiji.