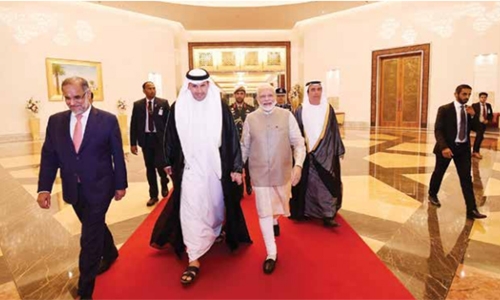 The Kingdom is all set to roll out a red carpet welcome to Indian Prime Minister Narendra Modi, who is scheduled to arrive here today. A world-renowned leader who has enchanted his admirers with an effective track record of developmental and welfare schemes in the billion plus country, Modi will become the first Indian Premier to visit the Kingdom.

Mr Modi will also visit the 200-year-old Shree Krishna Temple in Manama and will launch its rebuilding project in the presence of a large number of devotees. The visit will also witness many agreements and deals being signed between the Kingdom and India, mainly in space and information technology sector. Mr Modi arrived in Abu Dhabi yesterday evening on an official visit. Mr Modi is on a tri-nation tour that started in France on August 22 where he held bilateral meetings including a summit interaction with President Macron and a meeting with Prime Minister Philippe.

Mr Modi will receive the Order of Zayed - the UAE’s highest civilian honour His Highness Shaikh Mohamed bin Zayed Al Nahyan, Crown Prince of Abu Dhabi and Deputy Supreme Commander of the UAE Armed Forces at a special ceremony at the Presidential Palace today. Mr Modi is the first Indian leader to receive the honour. Both the leaders will hold bilateral talks and also discuss issues of regional and international importance. A commemorative stamp of Mahatma Gandhi would also be jointly released released by the two leaders on the occasion of Gandhi’s 150th birth anniversary.

India has a bigger role to play in Bahrain: Al Shola