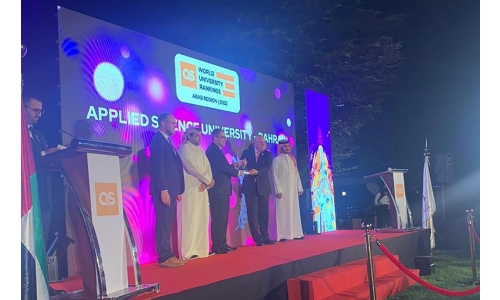 The Applied Science University in Bahrain has improved its ranking on the QS Arab Region University Rankings to reach 22nd position in the 2022 listing and first in Bahrain.

ASU is also the only university to enter this ranking for the fourth consecutive year from Bahrain.

ASU is also among the 150 emerging universities.

Following ASU on the QS ranking is the University of Bahrain on the 33rd spot and Ahlia University on 39th rank.

Massachusetts Institute of Technology, University of Oxford and Stanford University hold the first, second and third ranks, respectively, on the ranking.

Established in 2004, ASU is one of the first private universities in Bahrain and is in the Central Governorate.

The Applied Science University offers 18 (undergraduate and postgraduate) programmes, with more than 5,000 alumni and staff from over 22 countries.

It offers two international Engineering programmes from a well-respected university in the United Kingdom -London South Bank University. Prof. Wahib Al-Khaja, the Chairman of the Board of Trustees, said the ranking confirms the top position ASU possess at the local, Arab and international levels.

According to QS, on average, more than 70% of graduates of ASU find a job within six months of graduation.