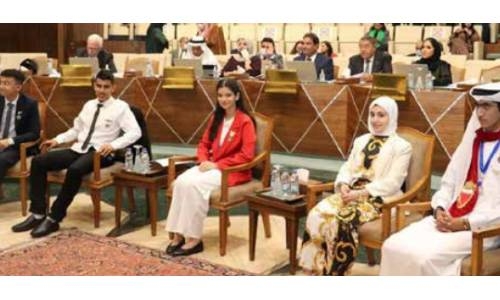 Students from Bahrain yesterday took part in the Arab parliament session held at the headquarters of the League of Arab states in Egypt.

Abbasi expressed her happiness for participating in the Arab forum and appreciated the encouragement of His Majesty King Hamad bin Isa Al Khalifa for her and her fellow students.

Abbasi said the Arab Parliaments provided its members with a unique mix of activities and events accompanied by targeted training, which helped achieve its objectives.

Ritaj Ibrahim Al Abbassi presented a souvenir to the President of the Arab Parliament.