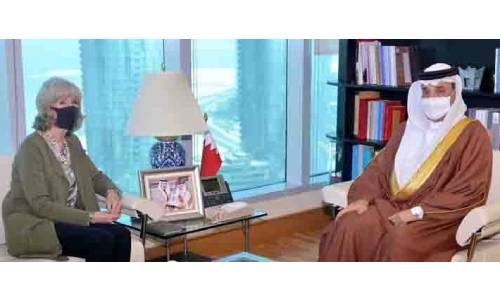 A top US Embassy official yesterday stressed the keenness of the United States to enhance its ties with the Kingdom at all levels.

Nardi told the minister that the US is keen to enhance its “constructive and fruitful cooperation with the kingdom at all levels, in a way that would serve the interests of the two friendly countries and their peoples.”

The meeting also reviewed the initiatives launched by the Kingdom to ensure the rights of the workers.

On this note, the minister highlighted the Wage Protection System and its role in ensuring the wage payment on time and as agreed.

Humaidan also shed light on the Kingdom’s efforts to combat discrimination through Labour law in the private sector.

They also discussed the results of the second edition of the National Employment Programme and the efforts exerted by the ministry to provide decent job opportunities to the citizens, incentives for employers that include wage support, training and rehabilitation programmes.

Discussions also focused on the roles played by the Labour Ministry LMRA for combating trafficking in persons.

Regarding social protection, Humaidan said the ministry is keen to support vulnerable segments and launch new initiatives for implementing the Restorative Justice Law for Children.