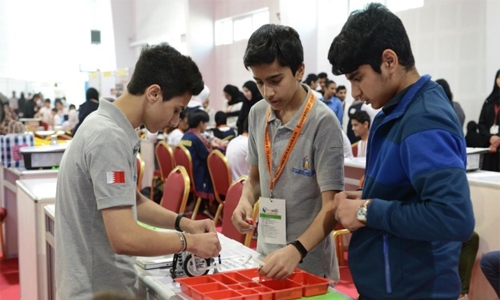 The tenth edition of the Bahrain National Robotics Competition 2021 will be held by the Ministry of Education from Sunday to Tuesday at Khalifa Sports City.

The event will be under the patronage of HH Shaikh Khalid bin Hamad Al Khalifa, the First Deputy Chairman of the Supreme Council for Youth and Sports, President of the Public Authority for Sports and Chairman of the Bahrain Olympic Committee.

Dr Mohammed Mubarak bin Ahmed, the Director-General of Schools Affairs, said the competition would enhance interest in innovation, creativity, and artificial intelligence. “Including such subjects in the curriculum and educational activities will promote the spirit of competition among schools,” he added. The competition will have the participation of 154 male and female students. A total of 54 teams will be put through their paces testing their skills in three different categories.

Both private and public schools are participating in the competition backed by Labour Fund “Tamkeen”. Winning teams will qualify for the World Robotic Olympiad, a global robotics competition for young people. First held in 2004 in Singapore, it now attracts more than 26,000 teams from over 65 countries.

Are you eligible to receive a booster shot?