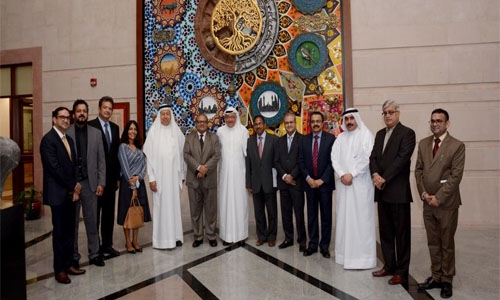 Some of the potential sectors highlighted by the Ambassador included renewable energy, pharmaceutical production, IT - data centre, agro-processing, logistics, tourism and infrastructure. Mr Srivastava also emphasized the importance of the BIS working closely with the Economic Development Board (EDB), Bahrain Chamber of Commerce and Industry (BCCI) and the Ministry of Industry, Commerce and Tourism.

BIS chairman highlighted the various initiatives taken by the society to achieve its objectives including:-

1) Working with the Indian Embassy to foster a closer relationship in terms of economic, cultural, sports and scientific fields between Bahrain and India.

2) Developing relations between the Confederation of Indian Industry (CII), The Federation of Indian Chambers of Commerce & Industry (FICCI), The Institute of Chartered Accountants of India (ICAI) and other national organisations of India which can lead to the promotion of trade and commerce between Bahrain and India.

3) To have closer coordination between other entities in India about business opportunities available which can be disseminated to the business community in Bahrain.

4) Setting up of Indian companies in Bahrain to take advantage of the FTA agreement between the US and Bahrain.

5) Hold a Bahrain-India Trade fair/show in coordination with the Embassy of India for specific sectors like Technology, Manufacturing and Tourism with participants from both countries.

7) Publish a booklet jointly with the Indian Embassy about general country information and doing business environment and legal structures in India and Bahrain.

8) To actively pursue the achievement of the Double Taxation Avoidance Agreement (DTAA) between Bahrain and  India. In this regard, the BIS Chairman handed over a letter addressed to Indian Finance Minister Nirmala Sitharaman giving justification for such an agreement.

BIS plans to hold a program next month to celebrate the commemoration of 50 years of diplomatic relationship between India and Bahrain as well as the 75th Independence Day of India. The focus during this event will be on culture and food.

The Board thanked the Ambassador for his support and encouragement to the BIS and assured to closely work with the Embassy to achieve all its objectives.