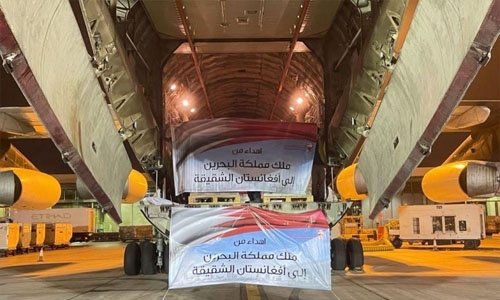 In implementation of His Majesty King Hamad bin Isa Al Khalifa’s directives, the Secretary-General of the Royal Humanitarian Foundation (RHF) Dr Mustafa Al Sayed announced the arrival of the fourth shipment of relief aid to Afghanistan.

Dr Al Sayed extended his appreciation to HM the King for his directives to deliver aid to the Afghani people, praising the support received by the RHF from the government headed by His Royal Highness Prince Salman bin Hamad Al Khalifa, the Crown Prince and Prime Minister.

He also expressed gratitude for the efforts made by the Representative of HM the King for Humanitarian Work and Youth Affairs His Highness Shaikh Nasser bin Hamad Al Khalifa in leading the RHF's humanitarian work.

Al Sayed indicated that the fourth shipment contained necessary medical, relief and food materials to alleviate the suffering of the Afghan people.

Bahrain's four shipments are part of the Kingdom's charitable endeavours and commitment to extending a helping hand to the needy in various countries, he added.