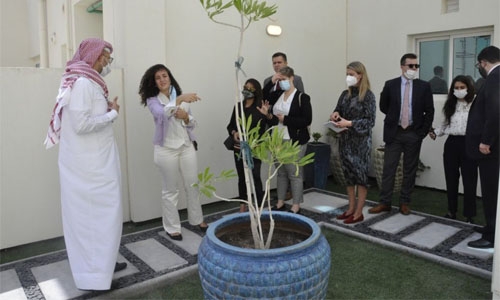 “Bahrain’s experience is pioneering in his sector, which deserves commendation,” said the US delegates. The visiting US delegation, comprising employees of the United States House of Representatives and the Senate, was touring the East Hidd Housing project.

The delegation was given a briefing on the East Hidd housing project, including its infrastructure, constructed houses, waterfront and lanes to practise various hobbies.

The members were also given an introduction to Bahrain’s modern towns and the services accompanying them. The delegates said the subsidised housing projects offered to citizens and works carried out by the ministry by joining hands with the private sector are particularly praiseworthy. After visiting several completed units and facilities, the delegates also expressed their admiration for the progress achieved by the Kingdom in its five new towns.

The US Congress delegation aims to strengthen cooperation between the two countries and collect first-hand information about the development projects.

Director of Housing Projects’ Construction and Maintenance at the Housing Ministry, Mohammed Rashdan, gave a presentation to the members on the main housing projects and modern towns in Bahrain