Path to prosperity, security and dignity for all | THE DAILY TRIBUNE | KINGDOM OF BAHRAIN 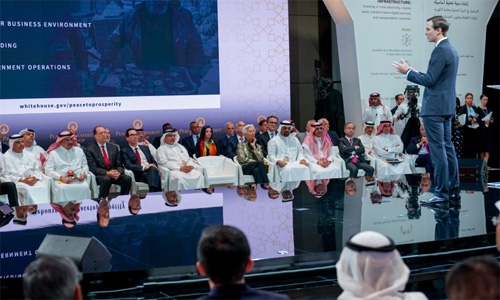 The “Peace to Prosperity” workshop had created a path to prosperity, security, and dignity for all involved. ‘’If the parties can agree on this framework as a basis for negotiations, the potential for both the Israelis and the Palestinians and the region is unlimited,’’ to quote the White House.

The workshop was hosted by the Kingdom of Bahrain in partnership with the US and attended by His Royal Highness Prince Salman bin Hamad Al Khalifa, the Crown Prince and Prime One of the focuses of the workshop was on the role of the private sector in securing the economic outlook of the Middle East.

The workshop brought together government, business, and civic leaders to discuss the right options to create economic prosperity and opportunity for the Palestinian people. The opening session included an introduction to the issues at hand in the Middle East and how the private sector can play a role in solving them.

The participants explained the benefits of investing in the Palestinian people’s future and how an investment-driven pathway forward is a critical element for ending the decades-old conflicts.

“The goal of this workshop is to begin thinking about these challenges in a new way,” said White House Senior Advisor Jared Kushner. “Let’s try to view this conflict and the potential of this entire region through a different lens and work together to develop a concrete plan to try to achieve it. For a moment, imagine a new reality in the Middle East.”

Business leaders Mohamed Aabbar, Founder and Chairman of Emaar Properties PJSC, and Stephen Schwarzman, Chairman, CEO and Co-Founder of Blackstone, both offered their perspectives and hopes for the future in a panel following Kushner’s speech.

Additional panels and conversations on other key topics including infrastructure development, supporting the entrepreneurial ecosystem, the importance of women’s empowerment, and the need for workforce development were also held.

The workshop was facilitating discussions on an ambitious, achievable vision and framework for a prosperous future for the Palestinian people and the region, including enhancements to economic governance, development of human capital, and facilitation of rapid private-sector growth.