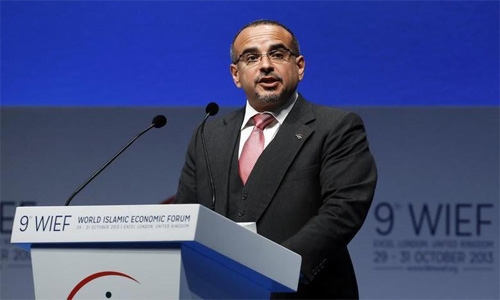 His Royal Highness Prince Salman bin Hamad Al Khalifa, the Crown Prince and Prime Minister is regularly sought after as a keynote speaker at international seminars and conferences.

The World Economic Forum is considered one of the major international economic gatherings, which discuss issues related to enhancing economic cooperation and social welfare as well as reducing global risks to ensure sustainable development.

One of the key pillars of Bah- rain’s economic strategy is to ensure that sustainable economic development benefits all citizens.

The Kingdom’s decade-long economic reforms have helped to foster an innovative economic environment.

The World Economic Forum’s Global Competitiveness rankings recognise the progress Bahrain has made in developing its regulatory framework, education and training programmes, and overall market efficiency.

tors that provide substantial economic returns. His Royal Highness stressed that Bah- rain’s diversification efforts have significantly reduced the economy’s dependency on oil, adding that sustainable development must inform every aspect of regional reform, and that ensuring the stability and security of the region is a key pillar for strengthening regional economies.

Participating in a session on re-considering capitalism at WEF2010, HRH the Crown Prince said the future policy of capitalism should lie on the concept that societies, governments and the business sector have all joint goals and gains and that coordinated efforts between the three parties is the optimum way to achieving economic development in general. Capitalism is the best choice that should be made successful by focusing at this stage on social responsibility and interest through upgrading education and boosting cooperation be-tween the public and private sectors in order the invest in the infrastructure, promote new ventures and ensure transparency of regulatory mechanisms, he said.