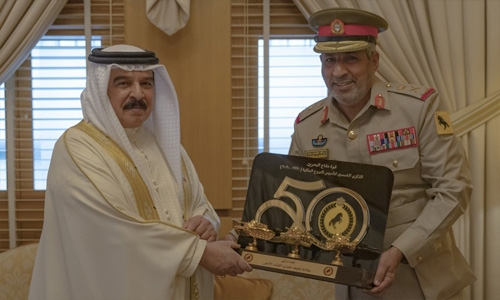 HM the King was presented with a gift marking the 50th Anniversary of the Royal Tanks.

HM King Hamad lauded the pioneering achievements of the Royal Tanks since its establishment, praising the steady progress witnessed by the Bahrain Defence Force (BDF) and its various branches.

HM the King requested Major-General Rashid bin Abdullah Al-Nuaimi to convey his greetings to all the affiliates of the Royal Tanks, valuing highly the patriotic efforts they are making, and hailing their high morale that reflects their constant readiness to carry out their duties to protect the homeland, preserve its gains and safeguard its security and the citizens’ safety.