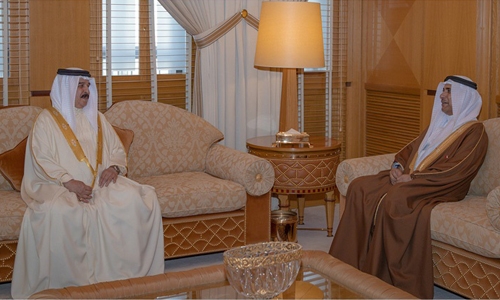 He also hailed its efforts in enhancing joint Arab action and extending bridges of cooperation between Arab peoples and other countries.

HM King Hamad congratulated Al Asoomi on the trust bestowed upon him by the Arab Parliament’s members, which reflects Bahrainis’ expertise and competence in holding Arab and international posts.

He commended Al Assomi’s efforts in serving Bahraini and Arab parliamentary work and wished him every success in carrying out his duties.

HM the King expressed pride and appreciation of the Arab Parliament, citing its constant honourable supportive stances towards Bahrain.

Al Asoomi expressed deepest thanks and gratitude to HM the King for his praise and appreciation. He also praised the kingdom’s stances in support of joint Arab action, affirming his keenness to consolidate the Arab Parliament’s role in defending the causes of the Arab nations.