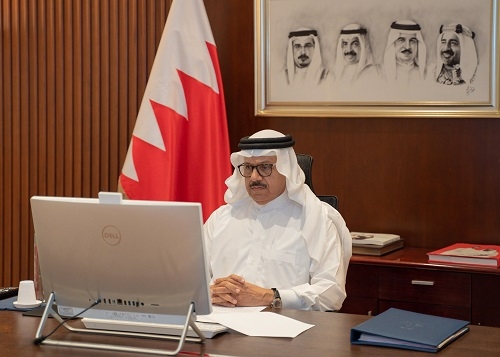 Foreign Affairs Minister Dr. Abdullatif bin Rashid Al Zayani has emphasized the great importance of strengthening relations between the Gulf Cooperation Council (GCC) and Russia in the face of the coronavirus (COVID-19) pandemic. Al Zayani was speaking during the joint ministerial meeting between the GCC and Russia held virtually yesterday on the sidelines of the 75th session of the United Nations General Assembly.

The meeting was chaired by Dr. Anwar Mohammed Gargash, the UAE Minister of State for Foreign Affairs, as UAE presides over the current GCC session, and the minister of Foreign Affairs of Russia, Sergey Lavrov. Al Zayani stressed the joint keenness to hold this meeting despite the current circumstances, noting that the pandemic is having a direct impact on the security and stability of the region.

The Foreign Minister praised the constructive role of Russia at the regional and international levels and its continuous efforts to maintain security and stability and reinforce peace in the region. During the meeting, they reviewed ways to strengthen and deepen the existing relations of co-operation and friendship and to advance ties to broader horizons at all levels, in order to meet the aspirations of both sides and achieve common interests.

Views were also exchanged on the most important regional and international issues of common concern as well as on developments in the region. He lauded the participants for showing their common desire for joint action and mutual belief in the importance of dialogue for the present and future of all sides. Also participating in the event were Oman Foreign Affairs Minister Badr bin Hamad bin Hamoud Al Busaidi, representatives of the GCC countries, and GCC secretary-general Dr. Nayef bin Falah Al Hajraf.