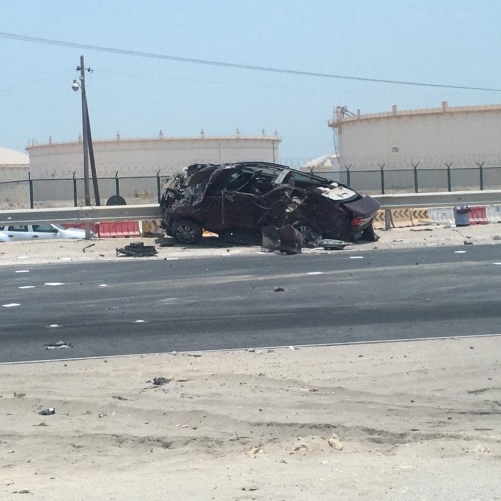 A34-year-old man was killed yesterday in a fatal and horrific crash in- volving three vehicles on Sheikh Jaber Al-Subah road towards Riffa near Sitra.

Police, who reached the scene immediately, rushed the victims to a hospital.

Initial reports said passengers in two of the vehicles involved in the crash managed to come out of the accident unhurt.

Interior Ministry in a twitter statement confirmed the accident.

The ministry statement said the accident occurred when the car driven by an Arab national lost control, veered out of the lane to the other side and crashed into two oncoming vehicles.

The crash is still under investigation.

The ministry withheld the name and other details of the dead person.

crushed completely, reducing it to a pile of metals.

Mangled car parts and debris could be seen scattered all over the place.

One of the first responders at the scene told Tribune that the crash happened on the road between the University in Si- tra and Bapco Crude refinery there.

He told Tribune that one of the cars flipped several times after hitting the other two vehicles, and smashed into the guid- ing rail installed several meters away, before coming to a complete halt.

He told Tribune that one of the victims was pronounced dead at the accident spot itself.