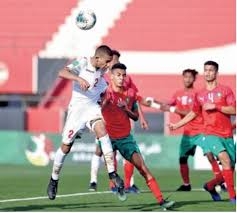 Bahrain’s junior national football football team suffered a 2-4 defeat to Morocco yesterday in their opening game of the Arab Cup U20, being played in Riyadh. The Bahrainis fell behind 0-2 to their opponents at the half but roared back into the match to equalise with goals just seven minutes apart.

But the Moroccans regained control and scored twice in the final 20 minutes to seal the win. On target for Bahrain were Sayed Jawad Alawi in the 56th minute and Salem Salem from the penalty spot in the 63rd. The game was the first for both sides in the competition, which features 12 teams in all. Bahrain are in Group B with Morocco, Madagascar and Djibouti.

They dropped to the bottom of their division standings with yesterday’s result, while the Moroccans rose to first place. Group A includes Tunisia, Mauritania, Kuwait and Iraq; Group C features hosts Saudi, Palestine, Algeria and Egypt; while Groupd D is comprised of Sudan, Libya, the UAE and Senegal. Bahrain are back in action against Madagascar on Thursday, after which they play their final group game on Sunday against Djibouti. Only the top two teams from each group following a single round-robin move on to the quarter-finals.