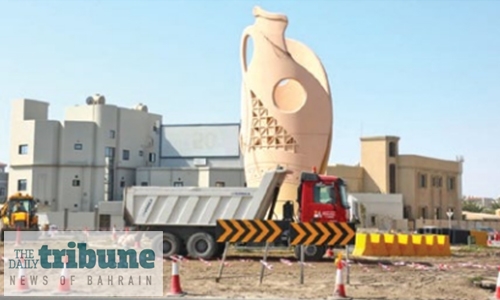 First steps to move the iconic pottery monument erected on a roundabout on Shaikh Zayed Highway in Aali were taken yesterday. The move comes as part of the expansion and enhancement works that are currently ongoing on the highway, which witnesses high traffic movement during rush hours on a daily basis.

This is because of the vital establishments in its vicinity, such as the General Directorate of Traffic, driving school, shopping malls, schools, commercial outlets and more, in addition to the fact that it connects main highways such as Shaikh Khalid Bin Salman Highway and Shaikh Salman Highway.

Northern Municipal Council Member and Municipal Representative of the Northern Governorate  Sixth Constituency (Aali) Hussain Al Aali previously revealed that the iconic monument, which represents the ancient pottery craft Aali is known for, will be moved and placed on a roundabout inside Aali.

Mr Al Aali clarified that the move comes as the “Pottery Roundabout”, along with other roundabouts on Shaikh Zayed Highway, will be removed and replaced by traffic signals as a solution to the heavy traffic jams witnessed by the area. According to the Municipal Council Member, the average waiting time during rush hours on the highway ranges from half an hour to 40 minutes.

The 14-metre tall monument was erected on the roundabout back in the year 2007, with a total cost of BD200,000. Since then, it has been a symbol to Aali; one of the largest towns in Bahrain and the house of the historical burial mounds and pottery factories.