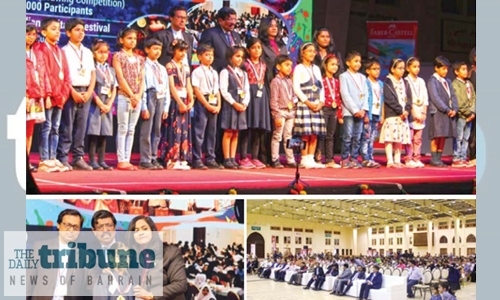 Over 4,000 children participated in ‘Spectra 2019’ organised by the Indian Community Relief Fund (ICRF). The event was filed with so many entertainments from various states, depicting the extreme variety of Indian tradition, culture and folklore. The results were announced and prizes were given away by the chief guest Indian Ambassador Alok Kumar Sinha, P K Chowdhary Second Secretary Embassy of India and ICRF officials.

The chief guest also honoured Sanjay Bhan of Faber Castelle, the title sponsor and Mr Salim of Viva, the presenter of the event. The response from the schools of Bahrain during the last ten years has been overwhelming, the organisers said.  The first carnival was held in the year 2009 with around 700 participants and last year during the 10th edition of the carnival, more than 4,500 students participated.

All participants were provided with drawing paper and materials at the venue. Top 50 winners in each age group received medals and certificates.