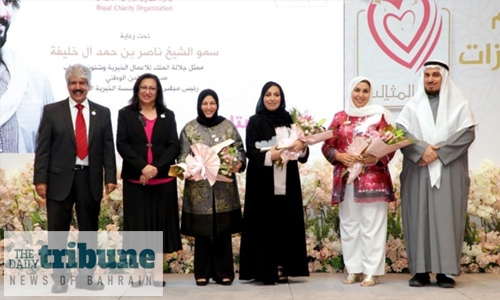 A ceremony honouring award-winning model mothers was held under the patronage of Representative of His Majesty the King for Charity Work and Royal Charity Organisation (RCO) Board of Trustees’ Chairman His Highness Shaikh Nasser bin Hamad Al Khalifa. The charity foundation organised the event, which was attended by Health Minister Faeqa Al Saleh, board of trustees’ deputy chairman Shaikh Adnan bin Abdulla Al Qattan, secretary-general Dr Mustafa Al Sayyed and other officials.

Dr Al Sayyed addressed the ceremony, commending the directives of  HH Shaikh Nasser bin Hamad Al Khalifa to take part positively in all initiatives promoting the status of Bahraini women. He cited particularly the initiative which was launched by Her Royal Highness Princess Sabeeka bint Ibrahim Al Khalifa, Wife of His Majesty the King and Supreme Council for Women (SCW) President to recognise brave mothers’ success stories and dedication in bringing up their children.

“I would like to express my sincere thanks and deep appreciation to every Bahraini woman who spares not efforts to serve her country, community and family,” said Her Royal Highness Princess Sabeeka bint Ibrahim Al Khalifa, Wife of His Majesty the King and President of the Supreme Council for Women (SCW). She made the statement on the eve of the annual Bahraini Women’s Day, which falls on the 1st of December. The 2019 edition is being held under the theme “Bahraini women in the fields of higher education and future sciences”.

She stressed the importance of this national occasion, which was launched by His Majesty the King 11 years ago, thus becoming an official celebration among other national days. The annual anniversary is being celebrated in tribute to Bahraini women in all walks of life – as mothers, educators, partners in national development and achievers in all productive sectors, dedicated more than ever to serving the nation and contributing to its progress and prosperity.

She commended all state institutions for activating programmes in the field of higher education and future sciences, praising women’s academic achievements, which entitled them to hold leading positions, obtain high degrees and gain membership in international centres. She lauded Bahraini women’s growing interest in the fields of future sciences and contribution to support Bahrain’s digital transformation and knowledge-based economy.