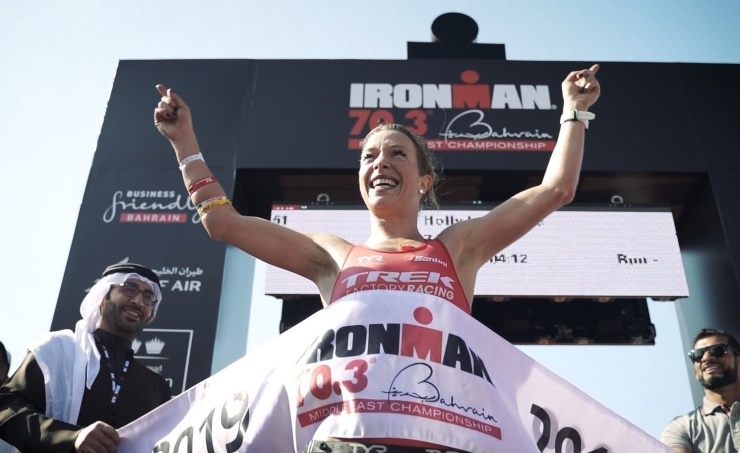 Triple treat for Lawrence in Bahrain

With His Majesty Hamad bin Isa Al Khalifa to greet her at the finish line, Lawrence stopped the clock in three hours, 52 minutes, 51 seconds.

Lawrence came out of the 1.9-kilometer swim sandwiched between two fellow British athletes, Lucy Hall and Jodie Stimpson. She dictated the pace on most of the 90-kilometer flat and fast bike leg. When the lead women came off their bikes within 15 seconds of each other, Lawrence got to work assuming the lead on the concluding half marathon. Only Stimpson could challenge her, or so it seemed as Lawrence preferred to stay by her shoulder than surge to the front. That all changed past the 10th kilometer as Lawrence opened up the throttle and powered away for the win. She broke the finish tape with a buffer of more than two minutes to Stimpson, and also improved on her finish time from last year by seven minutes.

The fast conditions and strong competition lent themselves to a new world record in the men’s race. Ben Kanute of the USA led the swim with defending (and eventual) champion Kristian Blummenfelt five seconds behind him, then stayed in the lead group of five men through the bike and onto the run. Kanute ultimately finished sixth in 3:37.58.

Lauren Parker showcased pure grit and spirit as she returned to the 70.3 distance in the PC category. The Middle East Championship aims to promote inclusion and participation in endurance sport, enabling differently-abled athletes to race on the same course and distance. This the Australian did with aplomb, finishing in 4:20.54.