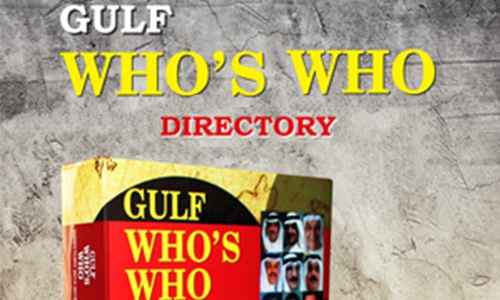 The latest edition of  Gulf Who’s Who Directory (GWWD) will be launched with many innovative additions on Monday, 25th November at 6.30 pm at the Gulf Hotel Convention Centre.  The brainchild of Sunliz Publications Managing Editor Sunny Kulathakal, the Directory has grown from a litany of names into an information-packed guide book to doing business and living in Bahrain.  Ever since the first edition came out in 1978, the Directory has been a popular record of the country’s Who’s Who?, tracing the Kingdom’s trajectory of growth through thumbnail profiles of its important people.

“The intelligent leadership of Bahrain has allowed the country to march ahead on the path of progress and unbelievable development,” said Mr Kulathakal. He added: “It must be added that it is the wise leadership of this country, under His Majesty King Hamad bin Isa Al Khalifa, Prime Minister HRH Prince Khalifa bin Salman Al Khalifa and Crown Prince and Deputy Supreme Commander HRH Prince Salman bin Hamad Al Khalifa that made BAHRAIN so vibrant and a force to reckon with.”

In line with the Kingdom’s Formula 1 craze and popularity the Directory starts with a feature on the  “Bahrain International Circuit “- the home of Motorsport in the Middle East. The new Bahrain International Airport also is being featured prominently.  The upcoming edition contains ‘Movers and Shakers’ where many men and women are featured. It also packs in an amazing amount of details about individuals and companies in the private as well as public sectors.

The sections in the Directory include photos and profiles of ministers and diplomats, Movers and Shakers of many industries, prominent women in Bahrain, media and advertising, hotel, airlines and associations.  The present edition is in fact an anniversary edition highlighting 100 years of Banking, Education, Hospital, Automobiles, Jashanmals, 50 years of Gulf Hotel, Awal Plastics and many other companies.

The first copy of the Directory will be received by Works, Municipalities Affairs and Urban Planning  Minister Essam Khalaf from Sustainable Energy Authority President Abdul Hussain Ali Mirza.  The keynote speaker will be Dr J Alexander IAS, Former Tourism Minister of Karnataka.  The Chief  Executives of Bahrain International Circuit, GPIC, Banagas, Tamkeen and many other companies will be honoured at the function.