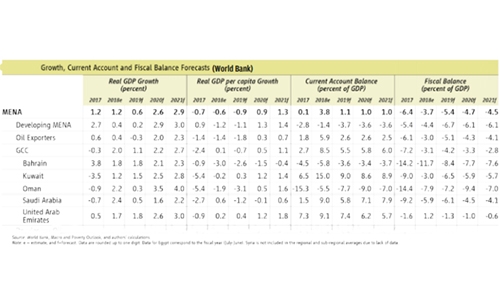 World Bank, however, paints a stable outlook on GCC’s economy, as oil prices are expected to hover around $60 per barrel. The GCC economies are expected to grow at 1.1pc on average in 2019—below their 2.0pc growth in 2018 and 0.9 percentage points lower than the April estimate. On average, growth in the GCC is expected to reach 2.2pc in 2020 and 2.7pc in 2021. Economists nevertheless warn that the fundamental challenge in the form of oil persists, even though diversification process has started to gain steam.

While regional financial support and a boost in non-oil activities have reduced near-term pressures on Bahrain, the World Bank economists point out that any deviation from the balanced budget target and other factors could lead to higher financing needs, intensify pressures on reserves, and reduce investor confidence.

The report further endorses that adhering to the reforms outlined in Bahrain’s Fiscal Balance Programme or FBP, which aims to achieve a balanced budget by 2022, will gradually narrow budget deficit to 7.7pc of GDP in 2020, improve the external current account position and lessen the pressure on Bahrain’s foreign reserves.

Bahrain outlined path under the FBP sees deficit falling from 12pc of GDP in 2018 to 8pc in 2019 and further to 2.1pc and 1pc in 2020 and 2021, respectively.  The plan, supported by US$10 billion in financing from other GCC countries, is being monitored by the Arab Monetary Fund.

A more powerful way, however, is to invigorate the economy by injecting more competition to promote more inclusive growth, the Middle East and North Africa Economic Update suggests. MENA must undertake policies to foster competition by creating an effective antitrust law that preserves a level playing field. In making this suggestion, the World Bank points out two landmark US cases - against IBM and Microsoft, which eventually unleashed substantial technological advancement.

The IBM case effectively opened the software industry by forcing IBM to stop selling computers and software as a package. The Microsoft case in 2001 likely kept the Seattle-based giant from trying to monopolise the nascent new economy by preemptively crushing companies such as Amazon, Facebook and Google (as it did to the competing web-browser Netscape, which sparked the antitrust action).

Bahrain, in 2018, made the first step to enhance its investment ecosystem by issuing orders to implement a Personal Data Protection Law (Law no.30), Bankruptcy Law, Competition Law (law no.31) and Health Insurance Law. “These laws represent a positive and significant step forward to increase and encourage foreign direct investments, and inject further resources into all economic sectors,” said Minister of Industry, Commerce and Tourism, Zayed R Alzayani at that time.

World Bank economists, however, points out lack of an enforcement authority as a hindrance in achieving its full objective. There is a need for different types of supervisory agencies - sectoral regulators, consumer protection agencies, Data protection administratorsto impose proportional penalties and remedies, the report says. At present, the powers of the authority, yet to be established, are with the directorate for consumer protection.

World Bank urges MENA to embrace this technological revolution if it is to leapfrog into the future while identifying the extensive investment here in the health and education of citizens as the source of the creativity and skills needed to drive the new economy. Missing out on the Fourth Industrial Revolution would leave the region on the wrong side of the digital divide, the report warns.

Regulatory SandBox, as well as other standards to boost the country as a hub for blockchain-based entities, strengthens Bahrain’s move forward in this regard. Another advantage Bahrain has, the report points out, is the high share of the working-age population, which the Kingdom has sought to encourage by recruiting more citizens in the private sector by subsidising salaries and providing financial support for businesses.

According to figures released by Bahrain’s Ministry of Finance and National Economy (MOFNE), Bahrain’s economy grew by 2.7pc in Q1-2019 boosted by expansion in the non-oil sector and higher spending on infrastructure thanks to the Gulf financial support package. Inflation is estimated to pick up in 2019 to 3.3pc given the introduction of VAT in January 2019. The top bank expects Bahrain’s non-oil economy to grow 3pc from 2020 to 2021.

Overall growth is estimated to remain at 1.8pc in 2019. The oil sector is estimated to grow by just 0.2pc following a 1.2pc contraction in 2018 capped by OPEC+ output cut agreement and weaker crude production.  VAT, introduced in 2019, is estimated to boost non-oil revenue by 2 percentage points of non-oil GDP this year compared to 2018.  The government’s VRS, which now covers around 8,000 people, could also reduce the wage bill by BD122 million by end-2019, assuming no new hiring takes place, the report adds.

“While implementing the FBP, the country faces tough public policy choices deriving from the cuts in social spending that may have a negative impact on the delivery of public services and safety net programmes. Designing a reform programme that protects the most vulnerable is, thus, critical to ensuring sustained progress and to enhance the welfare of the population,” the report recommends.

Grooming science talents of the future