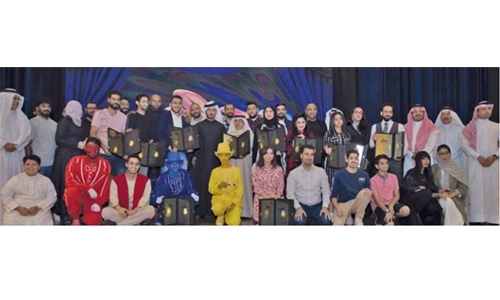 Bahrain’s theatre movement is scaling new heights of excellence thanks to the creative works of Bahraini youth that carry many noble goals to the society, said His Highness Shaikh Khalid bin Hamad Al Khalifa. The theatres of youth centres, national clubs and people with disability are rich with young talents who are widening the horizons of Bahraini theatre movement, His Highness Shaikh Khalid said.

HH Shaikh Khalid, the First Deputy President of the Supreme Council for Youth and Sports, and President of Bahrain Olympic Committee, was patronising the closing ceremony of Khalid Bin Hamad Youth Theatre Award Festival for National Clubs, Youth Centres and People with Disabilities, held at Muharraq Model Youth Centre in Busaiteen. The fest, Shaikh Khalid said, has granted creative Bahraini youths an opportunity to present their artworks, develop and contribute to the theatre movement in the Kingdom.

Now in its fifth edition, the fest aimed at enabling the youth of Bahrain in all fields to reaffirm that they are the “most effective element and real wealth of the Kingdom and its promising future.” HH Shaikh Khalid praised the plays and the national goals it carried.

The initiative was in line with the vision of His Highness Shaikh Nasser bin Hamad Al Khalifa, Representative of His Majesty the King for Charity Works and Youth Affairs, and President of the Supreme Council for Youth and Sports, and follows the principles and policies of the National Youth and Sports Development Programme-Estijabah.