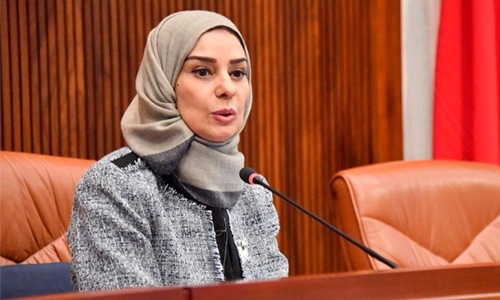 Speaker Fawzia Zainal affirmed that the international Parliamentary community nowadays is especially required to take an effective and influential stance to protect maritime navigation in the Arabian Gulf region and countries around the world to protect the global economy.

This came as the Speaker met the President of Serbian Parliament Maja Gojkovic on the sidelines of participation in the Inter-Parliamentary Union (IPU)’s 141st meeting held in Serbia Republic, in presence of the Shura Council’s Second Deputy President Jameela Salman and MP Fatima Abbas.

Ms Zainal stressed the importance of holding accountable any country that assaults international navigation and violates international laws and conventions on maritime safety, in order to preserve global security and peace. She reaffirmed Bahrain’s commitment to protect sea navigation with sisterly and friendly countries.

The Speaker pointed out Bahrain’s keenness under the leadership of His Majesty King Hamad bin Isa Al Khalifa, on boosting security and stability around the world, and supporting the promotion of the culture of peace, tolerance and coexistence. She cited the Kingdom’s established culture, laws and measures at all levels and areas that reflect Bahrain’s cohesive society bonds and pioneering position in the realm of tolerance and peaceful coexistence.

During the meeting, the two sides explored ways of bolstering the parliamentary co-operation, co-ordination at international platforms, and furthering the friendship ties between Bahrain and Serbia.