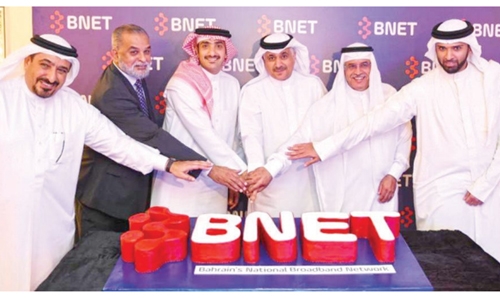 The Kingdom’s National Broadband Network (BNET) was officially launched at a high level press conference held at the Capital Club yesterday. The launch was announced by Batelco Chairman, Shaikh Abdulla bin Khalifa Al Khalifa, in the presence of the Minister of Transportation and Telecommunications, Kamal Ahmed, BNET CEO Mohamed Bubashait, CEO’s of OLO’s (Other Licensed Operators) and members of Bahrain’s media. During the event, the BNET logo, which will soon be rolled out to all customer touch points, was revealed.

The launch event follows on from the announcement of Batelco’s legal separation into two independent entities, which was announced at an earlier press conference held in May. As part of the legal separation, a new executive structure was implemented and new CEOs were appointed for both Batelco and BNET.

Independent buildings and departments were also allocated for each entity, in line with the nature of the companies’ work. In line with the requirements of the 4th National Telecommunications Plan approved by the Council of Ministers in May 2016, BNET will provide broadband network services to all licensed operators including Batelco, whereas, Batelco will focus solely on retail and corporate operations.

Mr Ahmed expressed his pleasure at the launch event by saying, “I would like to thank the team involved in the implementation of this successful project, which contributed towards turning the vision of the National Telecommunications plan into a reality, and is being witnessed today during this event. This project is a major leap for the services provided by telecommunications companies, where all customers will be able to benefit from high-speed Internet services from all telecom providers.”

During the event, Mr Mohamed Bubashait, CEO of BNET gave a detailed presentation about the company’s vision and functions as well as its strategy for managing the national network’s infrastructure. The presentation also included a detailed explanation of the operational model and work mechanism that the company will follow to achieve its objectives. Also revealed was BNET’s new logo, designed to symbolise both the national network and the Kingdom while being distinguishable from Batelco.

Shaikh Abdulla stated that he was very pleased to announce the launch of BNET which is a key part of the Fourth National Telecommunication Plan (NTP4) to develop the growth and economic diversification of the telecommunication sector, including rolling out a fibre optic network to 100 per cent of all businesses and 95pc of all households across the Kingdom. “The restructure of Batelco is now complete with independent management teams and human resources in place.

BNET’s teams are now working on the implementation of its strategic plans which focus on the development of the fibre optic network across Bahrain and the provision of high-speed Internet services for OLO’s on a fair and competitive basis. “The company will continue to complete the separation process as required in line with the Government’s strategy and future vision for the telecommunications sector.”

“This step is part of a series of initiatives aimed to enhance Bahrain’s position as a strategic investment destination, a regional ICT hub and a major contributor to upgrading the Kingdom’s telecommunications services,” he concluded.