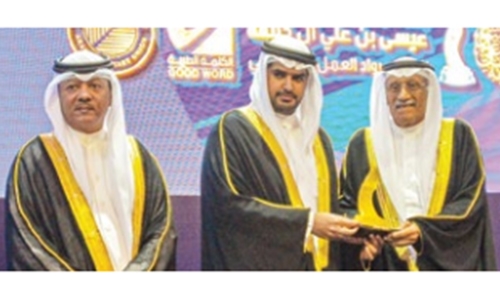 The Chairman of Bahrain Basketball Association (BBA) and Good Word Honorary President also honoured 14 voluntary work pioneering personalities representing 13 Arab countries in recognition of their dedicated contribution to serving their societies.  Deputy Premier HH Shaikh Ali bin Khalifa Al Khalifa attended the ceremony and stressed the importance of the award in fostering the culture of voluntary work to serve communities and societies and highlighted successful models, congratulating the winners and thanking the organisers for their efforts.

Shaikh Isa stressed the importance of fostering cohesion to strengthen social stability and foster values among new generations, stressing the importance of award which seeks to achieve these goals since its inception.  He said that the Government, chaired by His Royal Highness Prime Minister Prince Khalifa bin Salman Al Khalifa realised the crucial importance of the role played by non-governmental organisations, facilitated procedures and supported constructive initiatives.