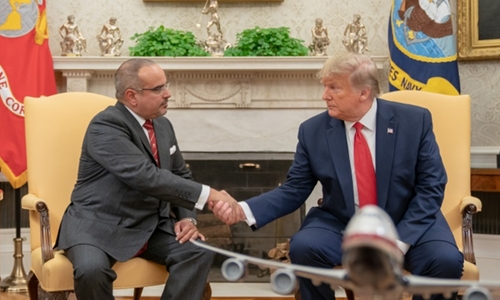 HRH the Crown Prince began by conveying the greetings of His Majesty King Hamad and the people of Bahrain to President Trump. HRH went on to point to the strength of the relationship between the two countries based on shared values and ideals.

President Trump welcomed the Crown Prince adding that it was a great honour to meet once again, and that he and Bahrain are great friends of the United States of America.

The President emphasised that the United States was always going to stand with Bahrain and this was highlighted by the tremendous security, economic and trade relationships. Relationships that he added had never been stronger than now.

The Crown Prince noted that the longstanding relationship between Bahrain and the U.S. is based on defence initiatives, trade agreements and cultural bonds, which support the security and economic prosperity of both countries. HRH the Crown Prince went on to stress the importance these discussions in further enhancing security and trade cooperation.

HRH and President Trump then discussed strategies to maintain security in the Arabian Gulf, emphasising the importance of countering those who would seek to undermine stability in the region and further afield.

Premier orders to step up security