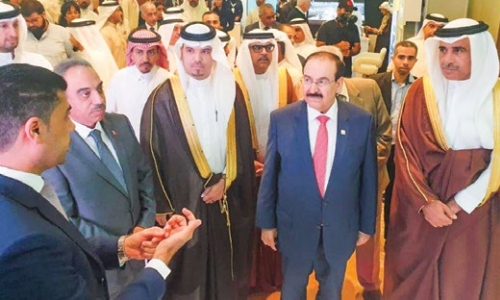 Minister of Works, Municipalities Affairs and Urban Planning Essam Khalaf has announced the opening of the first seafront project fully dependent on renewable energy (Busaiteen Seafront Project) this month. The project, he said, will serve as a starting point for other new ones as part of the ministry’s future policy, like using solar energy in agricultural projects.

The minister was speaking as he opened yesterday “Bahrain Smart Cities Summit 2019”, in the presence of senior officials and with the participation of more than 30 keynote speakers and experts from the public and private sectors. He noted the ministry’s keenness to carry out purposeful initiatives in developing smart cities within the framework of implementing development and infrastructure projects in accordance with modern trends.

He pointed out the ministry’s efforts to achieve the vision and contribute to attaining the global sustainable development goals by organising the fourth edition of the conference and creating an associated exhibition with the participation of over 20 parties from the public and private sectors. The exhibition is considered the first of its kind in Bahrain concerned with smart cities. The Kingdom hosted for the first time regional Director of the World Green Buildings Councils (GBC)’s MENA Network Mohammed Asfoor who gave a presentation on the latest developments in the green buildings sector.

In a statement to Bahrain News Agency (BNA), Electricity and Water Affairs Minister, Dr Abdulhussain Mirza said smart cities are areas built using digital and engineering technologies to improve the economic and social conditions of the residents of these cities by providing and facilitating their access to services. He pointed out that smart cities will rely on sustainable and renewable energy such as solar and wind energy.

He underlined the Kingdom’s interest in the sustainable energy sector and keenness on sustainable development, pointing out the important steps taken by the government to encourage investment in renewable energy. He also pointed out the national goals set by the government to increase the users of renewable energy to 5 per cent by 2025 and 10pc by 2030. The first day of the summit featured many activities including panel discussions and work papers.

Many awards were also announced during the summit which will continue until tomorrow with the discussion of a number of work papers.