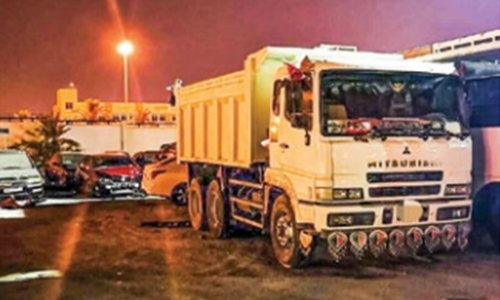 An Asian truck driver was yesterday sentenced to two months’ imprisonment for driving on the emergency lane on Istiqlal Highway near Sanad. This came as the Seventh Lower Criminal Court yesterday announced its sentence, one week after the General Directorate of Traffic in Interior Ministry confirmed the arrest of the man. The court also ordered to permanently deport the defendant after he completes his imprisonment sentence.

Traffic Prosecution Chief Prosecutor Hussain Al Sairafi said in a statement issued by the Public Prosecution yesterday that the man drove his truck over the speed limit of the road and “drove in a manner that risked motorists lives and used the emergency lane to overtake vehicles”. As reported by Tribune last week, the trucker was seen in a viral video online while speeding and driving on the hard shoulder of Istiqlal Highway.

In the footage, the man was seen over-speeding and overtaking other vehicles using the emergency lane. He was filmed by a concerned driver who shared the video on local social media networks, calling the authorities to take deterrent actions against such violators, especially after the numbers of fatal accidents caused by wrong driving behaviours by truckers on the rise in the past few months.

One day after the video was circulated online, Interior Ministry announced through a tweet that the driver has been apprehended, stating: “Concerning the circulated video on social media about reckless driving by a truck driver on the road in a way that risk the safety of road users, the General Directorate of Traffic seized the vehicle and arrested the driver.” Soon, the Public Prosecution announced that it had interrogated the driver, who confessed to his crime, before referring him to the Criminal Court.

This is the third trucker to be arrested within less than a month because of reckless driving. This came in line with a nationwide petition calling to curb the “deadly” behaviours of truckers on the Kingdom’s roads, especially after it claimed the lives of two Bahraini drivers in the same period.