Metro on the right track | THE DAILY TRIBUNE | KINGDOM OF BAHRAIN 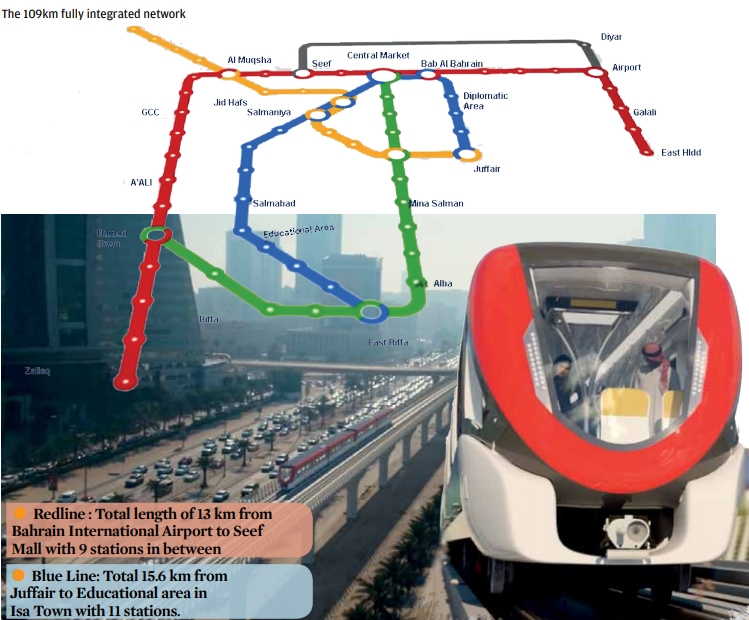 Metro on the right track

If asked what would be the most important change Bahrain would witness in the next five years, the answer will be ‘Metro’.  And what better way, other than having an efficient transport infrastructure, to boost the progress of a country which registers over 40,000 cars per year Challenges are there, but they can be overcome, as experts say, with energy-efficient technologies and customer-focused approach.

In fact, there are so many proven instances around the globe to know how a good transport infrastructure has added speed and efficiency to a country’s progress.

In Bahrain, as said, the project offers equal number of challenges and opportunities.  Now, this has become realistic more than ever with the Ministry of Transportation and Telecommunications showing a green light to the Preliminary design of Bahrain Urban Transit Network (Bahrain Metro).

It has also shortlisted three firms, Al Zayani Engineering, KPMG, and Pricewaterhouse Coopers (PwC) the Middle East for Phase 1 of Bahrain Metro. Being developed under a public-private partnership (PPP) scheme by the MTT, the metro will have 20 stations (2 interchange) and a depot/stabling facility in its first Phase 1, which is the starting point for the implementation of the Bahrain Urban Transit Network Project (BUTN) which will have 4 lines and 109 km.

Upon realisation, Bahrain will be the fourth country in the region to modernise its public transportation services after Dubai, Saudi Arabia and Qatar.

According to Bilbao based consultancy firm IDOM, which designed Phase 1 of the project, Bahrain’s metro will be a fully automated, driverless system through the main residential, business, administration and leisure spots in the Kingdom. It is also the second large-scale transport project to be developed by IDOM in the Gulf area after the Detail Design of Line 3 of the Riyadh Metro.

The design of Bahrain metro, which has a 30 km elevated path, also resulted in IDOM winning Bahrain Project of the Year Award from Institution of Civil Engineers ICE.  The Kingdom, ministry report says, needs 109km of the metro network and should be executed in phases.

The network, as IDOM said, will be fully automated with phase 1 running for a total of 28.6 kilometres.  Red lines and Blue lines will make up phase 1, which at the peak time will be capable of transporting up to 43,000 passengers.

The network will include 20 stations operating through two lines. The first line, according to MTT, will connect Airport to Seef Mall through Airport Avenue and King Faisal Highway, the Avenues Mall, Bab Al Bahrain, and Bahrain City Center Mall through 9 stations.

The passengers can transfer between the two lines in both interchange stations and these are Bab al Bahrain and al Farooq Junction stations.

The phase will be launched soon along with issuing a tender for Transaction Adviser services which will be responsible for preparing the tender document for the consortium of the project, according to MTT.

But what makes Bahrain’s Light Rail network project more attractive will be its link to the proposed Bahrain passenger terminal at Salmabad which will con- n e c t through a 70 km rail line to the existing railway line in KSA between Dammam and Al Houfuf. The rail connection will form Bahrain’s link to the GCC railway project and wider KSA rail network.

The rail connection, according to MTT, is expected to boost the port business and help in achieving Bahrain’s aspiration to become a major logistics hub. The project will be delivered in partnership with the Ministry of Transportation in KSA and King Fahad Causeway Authority and procured through a form of Public-Private Partnership procurement model.

A statement on the ministry website says preparations have been finalised with King Fahd Causeway Authority releasing a tender in November 2018. The advisor is expected to be appointed in the third quarter of 2019. Once realised, the GCC Railway will link all six Gulf States and will serve as an alternative to air and sea travel for both cargo and passengers in the region.

The project is also expected to contribute significantly to the region’s economic growth by reducing overall transportation costs and providing an efficient, environmentally- sound and cost-effective transport alternative.

The project will also serve in enhancing and facilitating regional trade and in promoting GCC national supporting industries in the neighbouring economies. It will also generate employment for GCC nationals as well as build and strengthen institutional capacity and skills required for sustainable railway developments.

In a nutshell, the GCC and particularly Bahrain is going to witness a deluge of development in the coming period, which would, in fact, alter the economic landscape of the kingdom by bringing in new and vibrant players thereby boosting Bahrain’s diversification efforts.

The Bahrain Rail Congress 2019 which will be held under the theme “Designing & Developing a Well Connected World Class National Rail Network in the Kingdom of Bahrain” on 2nd and 3rd October 2019 in Hotel Sofitel, Zallaq- Bahrain is expected to provide further momentum to the project.